Lessons from Norway for passenger rail in Minnesota

When talking about expanding passenger train service in Minnesota and other parts of the U.S., it's common to be told that our area of the country has cities that are too small and spread out for it to ever work. Supposedly, only the Northeast and a few other heavily-populated areas have the population and travel demand to support passenger rail. We certainly don't have the same densities as France, Germany, or Japan, but I had a feeling that there are parts of the world are much more similar to Minnesota or other parts of the Midwest, yet have successful rail systems.

I started searching for such places earlier this year, initially looking at our nearest neighbor, Canada. Unfortunately, it turns out that Canadian passenger rail policy has produced a worse overall result than what we've seen here (Via Rail has a network that pales in comparison even to our skeletal Amtrak system, something I hope to delve into in a future article). Eventually, I turned to Europe to see what I could find over there, and discovered that Norway's fits our situation pretty well.

Norway is an interesting place to compare, especially since a sizable chunk of Minnesota's population is descended from people who migrated here from Norway or other Scandinavian countries. (Of course, it's about twice as common for a Minnesotan to be of German heritage rather than Norwegian.) 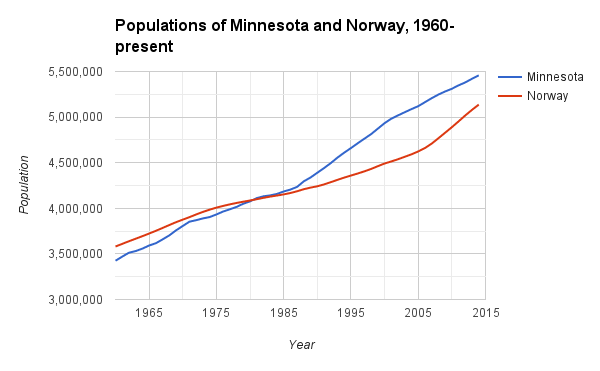 It turns out that Minnesota and Norway have had similarly-sized populations for the last several decades, and have been growing at similar rates. In fact, Minnesota passed Norway's population around 1981, when Minnesota reached a population over 4.1 million. However, Norway is a lot larger than our fair state: 149,000 square miles (385,000 km2) of land, 1.7 times our 87,000 sq. mi. (225,000 km2). Since Minnesota has a somewhat bigger population, we have an overall density 1.9 times that of Norway.

The country's shape is stretched out compared to our state borders. Most of it is narrower than Minnesota, but Norway is about 1,150 miles end-to-end. Since Minnesota is about 400 miles north-to-south, you'd need to stack nearly three Minnesotas on top of each other to reach Norway's northeastern edge.

If our area can't justify the existence of passenger trains, then surely it doesn't make sense for Norway to have any, right? But in fact, they have a system that is widely used. Here's a map of Norway's passenger rail network along with major cities (5,000 and larger) and other significant municipalities (kommunes): 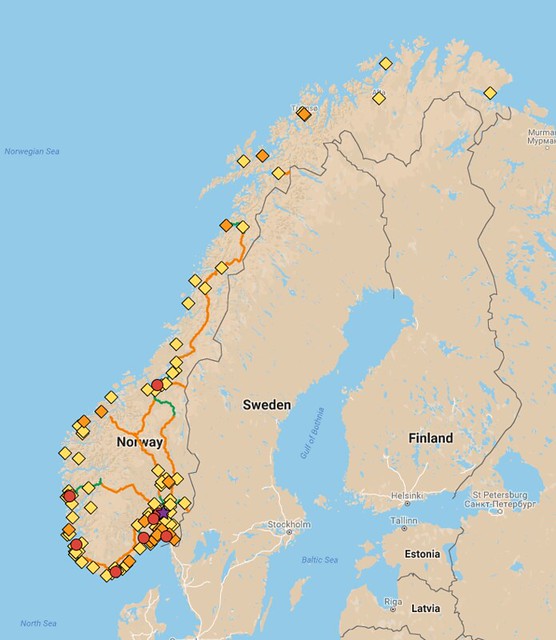 Here's the same map with the city markers removed so the lines can be seen more clearly: 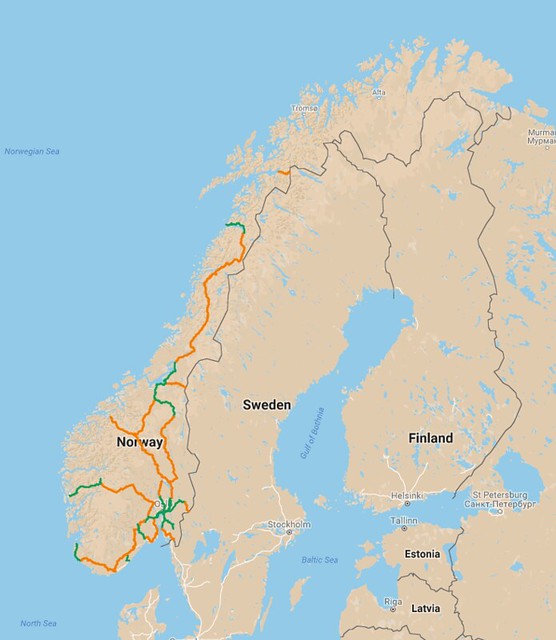 (A zoomable version is available here.)

The main rail network extends from Bergen and Stavanger in the western part of the country eastward through Oslo and into Sweden, along with two lines that run north from Oslo toward Trondheim. From Trondheim there's one line that extends to Bodø, which lies north of the Arctic Circle. A short stretch of track also connects the city of Narvik even farther north, though the only way to get there by rail from other parts of Norway is to go through Sweden.


Minnesota only has Amtrak's Empire Builder (one daily round-trip) and the Northstar commuter train (six daily round-trips) providing passenger service on the state's intercity rail network, which only adds up to 800,000 or so annual riders (Northstar had 722,600 riders in 2015 according to the APTA, and Amtrak recorded 138,631 boardings+alightings for the year, but that double-counts some people and doesn't count others who rode straight on through). As I mentioned in my previous post, I noted that we only see regular passenger trains operating on about 375 miles (600 km) out of the state's total 4,444 miles (7,152 km) of track.

Minnesota's rail system grew dramatically from zero miles of track in 1860 to nearly 9,300 miles (14,970 km) in 1920, when the system reached its peak size. Since then, nearly 5,000 miles have been abandoned. Norway's rail system is fairly small in comparison: At 2,540 miles (4,087 km), it represents just over half of the trackage than we lost over the last century. Despite that, they strongly outperform us when it comes to moving people around by rail.

Norwegian State Railways (NSB, for Norges Statsbaner) provides most intercity and commuter train service in Norway. In 2015, they carried 67.1 million passengers on trains within the country, plus another 5.3 million across the border on routes that connect to major cities in Sweden. Their in-country ridership is about 80 times the level we see here. NSB also turned a profit in the process.

NSB also operates a companion bus network, primarily under the Nettbuss name, which serves intercity and commuter passengers, though they also operate the local bus services in some cities. This bus system contributed another 75.3 million to the total number of passengers NSB carried in 2015.

Norway's rail network grew at a much more deliberate pace than the system in Minnesota, perhaps due to the country's challenging topography. Steep mountains force most population and infrastructure into the valleys between them and around the edges of lakes and fjords. However, Norwegians have become adept at using tunnels and bridges to make their own paths through the mountains and across large bodies of water. For instance, there are nearly 700 rail tunnels in the country, many of which are several miles long. Minnesota has very few rail tunnels, perhaps only a dozen, and they're mostly very short (the longest in the state are the Blue Line's tunnels at MSP airport, and that's outside of the scope of this article since that's an urban light rail line rather than an intercity service).

It took until 1909 for the line from Oslo to Bergen to be completely built, a major accomplishment for the country at the time. The pace of growth picked up after the country was invaded by Nazi Germany during World War II, as the new regime saw military advantage in having an expanded system and were willing to exploit the labor of prisoners of war to do it. The southern line to Kristiansand and Stavanger was completed in 1944, and the northern line from Trondheim toward Bodø was significantly expanded during the war. It finally reached that city in 1962 (passenger service included), a time where American railroads could hardly kill off their passenger and freight lines fast enough.

The country has continued to invest since then, including electrifying nearly 2/3rds of the rail network and adding new tunnels to straighten out and speed up older routes that used to skirt around major obstructions. You can see how old and new tunnels mix together on the Bergen Line for yourself, since the state TV broadcaster (NRK) created a "slow TV" recording of the entire 7-hour journey from Bergen to Oslo:

The train in that video operates as an express service near Bergen and Oslo, only stopping at major stations in those areas, but it makes many stops on the stretch between Myrdal and Hokksund. Despite that being a sparsely-populated region compared to the coasts with few larger towns, there are often significant numbers of passengers getting on and off at the stations. Some stretches of the Bergen Line have top speeds of 100 miles per hour (160 km/h), though most of it twists and turns enough that those speeds aren't regularly achieved.

The vast majority of Norway's rail system carries passenger traffic in addition to freight. Generally speaking, only short branch lines off of their mainline network (often just 10 to 20 miles in length) have been abandoned or converted to freight-only use, a stark contrast to what we see in the U.S. They also operate passenger trains more frequently. For instance, there are five round trips per day* on the 308-mile (496 km) route between Oslo and Bergen. A similar journey here might be between the Twin Cities and Green Bay (about 280 miles or 450 km).

*(Technically, only four trains go all the way to Bergen—one round-trip has its western endpoint in Voss, but there are 21 trains running from Voss to Bergen each weekday.)

In addition to those longer-distance services with their handful of daily trips, many of Norway's larger cities have shorter-distance local services running much more frequently. Oslo, which has a population of 658,000 and is in a metro area of 1.7 million people, has the biggest commuter rail network, but Bergen (pop. 250,000), Stavanger (211,000), Trondheim (175,000), Skien/Porsgrunn (92,000), and Bodø (40,000) all have more frequent local trains connecting them to towns along the lines that operate to/through them, sometimes up to distances of about 100 miles away.

That gives me a lot of optimism that there's unexploited potential in much of the rail system in Minnesota and other parts of the U.S. Of course, there are a lot of differences between our region and Norway which could throw a monkey wrench in the works. Cars are more expensive to buy and operate in Europe than they are here, and we have a much bigger network of freeways and other major highways than Norway does. But our region is pretty flat, meaning most ordinary rail lines are much straighter here than over there, and could sustain pretty high speeds if they were just rehabilitated and maintained to the right standard.


Could we ever get to the level of carrying 67 million passengers a year over the existing freight network here? It would be a big challenge, to be sure, but we can definitely create something better than what exists today. Nearly all of the cities in our state over 5,000 people (which account for 70% of the state's population) are on or near the freight network, and those same lines go through many smaller towns that could also be served. Even if we just set up a core system of rail routes and used buses for many of the connections to smaller towns, we'd probably be a lot better off than we are now.

We have a network already in place that's much more extensive than the Norwegian system. Many northern cities don't have train service, and some cities are on islands that are hard or impossible to reach with ground transportation. In fact, Norway has one of the biggest air travel markets in Europe relative to its population, since many people don't want to deal with the relatively slow, constantly curving routes of roadways and rail lines. People traveling by car also often need to use ferries to reach between islands and fjords, which further slows down journey times. Our flatter region isn't nearly as difficult to build through.

The world recently passed a milestone where carbon dioxide is now saturating the atmosphere at a level of 400 parts per million, and it's continuing to rise year over year, right along with global average temperature. To hold back that rise, we'll have to do everything we can to shift people to using less carbon-intensive modes of travel. Biking, walking, and urban transit are good for local journeys, but it's necessary to build up a good public transportation network for spanning the larger distances between cities too. We have an untapped resource sitting on the ground, and I hope we start using it to it's fullest potential.