Prospects for passenger rail in Wisconsin

In my most recent two posts, I looked at the opportunities I see for passenger rail in Minnesota followed by an entry examining Norway's passenger rail network to make some comparisons. There are similarities such as the fact that Minnesota and Norway have about the same population and have been growing at about the same rate. Norway has a much bigger and healthier system of passenger train lines than Minnesota does, although we here in the Midwest have far more overall rail mileage installed due to the vast number of freight lines that were built back in the late 19th and early 20th centuries.

This time, I thought I'd turn to our neighbor, Wisconsin, and see what opportunities might exist there. In the 1990s and early 2000s, Wisconsin had been one of the states pushing for expanded passenger rail service in the Midwest, notably leading the Midwest Regional Rail Initiative which was planning several lines radiating out of Chicago which would operate at speeds up to 110 miles per hour.

A couple of these have come to fruition to some extent, such as Amtrak's Chicago–Detroit and Chicago–St. Louis corridor. However, an enhanced-speed extension of train service from Milwaukee to Madison in Wisconsin was canceled after the election of Scott Walker in 2010, and prospects for extending that all the way to the Twin Cities have largely evaporated aside from plans for a second daily train along the route. Even that straightforward idea has taken way too long to be implemented.

Here's a map of existing passenger rail in Wisconsin: 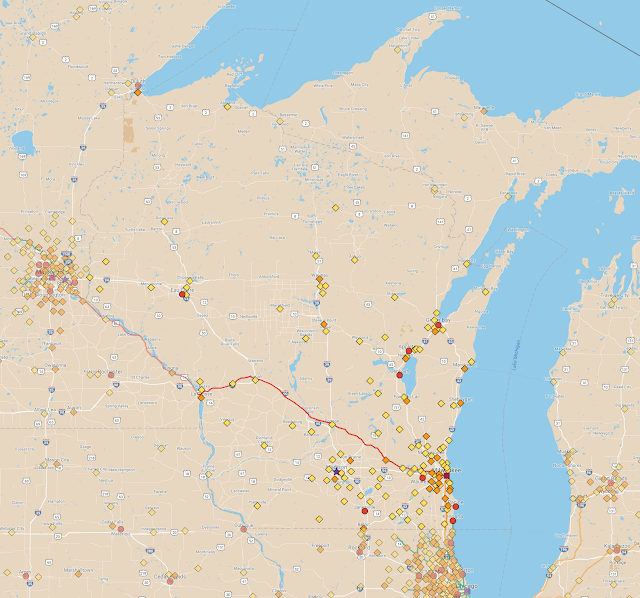 The service that exists today in Wisconsin is very similar to what Amtrak has offered there ever since it was created in 1971. The number of passenger trains per day on the Hiawatha service between Milwaukee and Chicago has increased, but west of Milwaukee, there's only one Empire Builder per direction per day. Chicago's Metra commuter train system also has a little bit of service in Wisconsin, but it only extends about seven miles into the state, ending in Kenosha.

As in my previous maps, I've included markers for all cities of 5,000 residents or larger. Wisconsin has a population that's a bit more spread out than in Minnesota. Most people in Minnesota live in the Twin Cities region (about three million people), but Milwaukee's metro area is not quite as big (only about two million). The state's largest cities are a more widely distributed, which in a way makes the state better suited for supporting an intercity public transportation network.

Here's a concept map I made that could be used to connect all of Wisconsin's cities of 5,000 and up into a rail network. About ten cities were on abandoned lines or had never been connected to the state's freight network, and those are on lines drawn in purple, indicating that they're on corridors that need to be restored or built new. Blue lines indicate track that is still in active use for freight which I think could have value for passenger service: 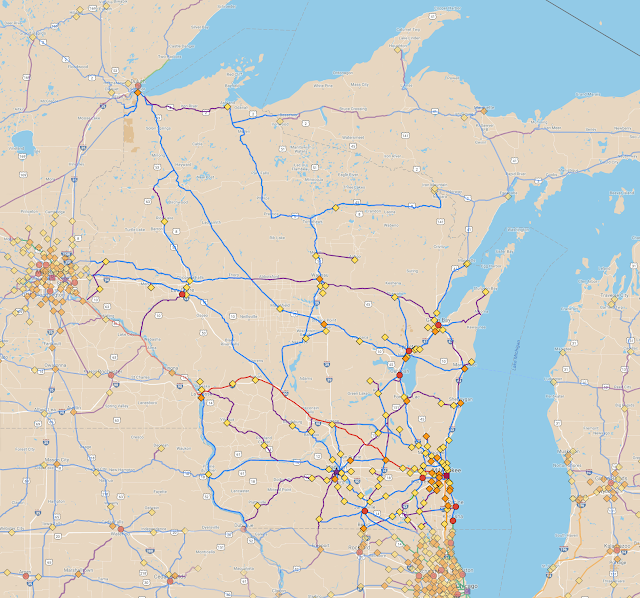 Here's a zoomable version of the Wisconsin portion of that map.

That's just one idea out of many possible route combinations for the state, which could grow larger or smaller depending on how things get prioritized. Some of the best corridors on the map include the ill-fated extension to Madison (which would have branched off from the Empire Builder corridor in Watertown) and a route from Milwaukee to Green Bay via the west coast of Lake Winnebago, hitting Fond du Lac, Oshkosh, and Appleton along the way.

An extension of the Metra corridor along the shore of Lake Michigan from Kenosha through Racine to Milwaukee is another no-brainer, and probably something that would have been implemented by now if not for the political machinations of the last decade. A few other radial Metra lines could logically extend into southern Wisconsin heading in the direction of Janesville and Milwaukee's southwestern suburbs and exurbs.

The Milwaukee area retains a fairly robust system of rail lines which could be used for commuter-style service. Madison also has a good potential for lines radiating out, though a few of those have been abandoned over the years. Janesville, the home of U.S. Speaker of the House Paul Ryan, doesn't have that many suburbs in its immediate vicinity, but it turns out to be a natural crossing point for a number of lines between other places, and could be a significant passenger rail hub someday.

MnDOT has plans for a regional train service from the Twin Cities to Eau Claire, though it's hard to say when that might move forward. That line could be extended southeast to combine with the existing Amtrak corridor to Milwaukee (owned by Canadian Pacific), though another line toward Appleton and/or Green Bay would also be a good option.


Finally, I'll mention that Wisconsin has ferry services operating on two routes across Lake Michigan. They run from Milwaukee and Manitowoc on the Wisconsin side to Muskegon and Ludington on the Michigan side, respectively. Milwaukee already has passenger rail service, but the other three cities would benefit from being connected to the rail system as well. 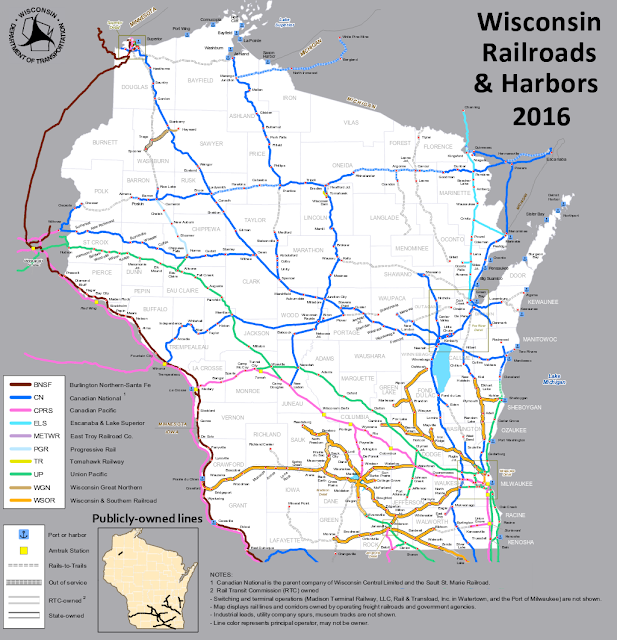 Surprisingly, a substantial amount of Wisconsin's rail network is either owned by the state or by other public agencies (primarily shown with outlined orange lines in the above map). Most of this publicly-owned network is operated by the Wisconsin & Southern Railroad, including the segment between Watertown and Madison which was set to be upgraded for higher-speed service when the plug was pulled in late 2010. Bizarrely (to me, anyway), the CEO of Wisconsin & Southern found to have been illegally funneling campaign contributions to Scott Walker's campaign in the 2010 election, thereby helping to torpedo the $810 million project that would have directly benefited his railroad. I'm not sure I'll ever wrap my mind around that one.

Wisconsin is fairly well-positioned to take advantage of its rail network for passenger service, if only politics could get out of the way. Hopefully things will change sometime soon, but it's hard to predict when that might happen.

As in Minnesota, Wisconsin's rail network has been shrinking for nearly 100 years since the peak of rail travel back in the 1920s. Many of the lines that were abandoned were deservedly dropped, but some of those lost corridors should have been retained for passenger operation even if they didn't carry much freight. The system is at a much more financially sustainable size now, and is probably close to bottoming in terms of overall mileage, but there's still the potential for critically important segments to be abandoned. That's one reason why it's important for the state to step in and help coordinate the maintenance and use of what is still in place and protect them from being lost to future generations.
Posted by Mike Hicks at 10:14 AM 1 comment: