The stagnant investment in Amtrak, by station count 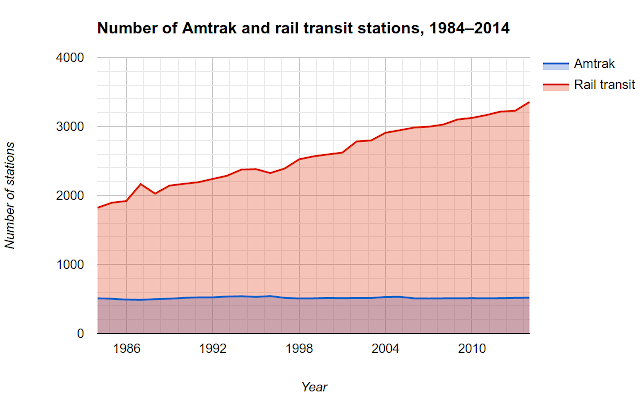 Amtrak, the country's intercity passenger rail company, has had its funding stuck in the doldrums ever since it was founded in 1971. There have been sporadic bursts of money to the government-sponsored company, mostly to invest in new locomotives and train cars and the occasional upgrade to the tracks on particular routes. However, there hasn't been a sustained effort to repair and expand underlying infrastructure on a system-wide basis. This is reflected in the fact that the number of stations served by Amtrak has barely changed over time, in stark contrast to the growth in urban rail systems over the same period.

The graph above shows the number of stations for both Amtrak and the nation's urban rail systems from 1984 to 2014. Over the course of 30 years, urban transit systems grew from 1,822 stations to 3,355, an increase of 84%. Growth in urban systems been pretty linear, with about 51 stations added per year on average. 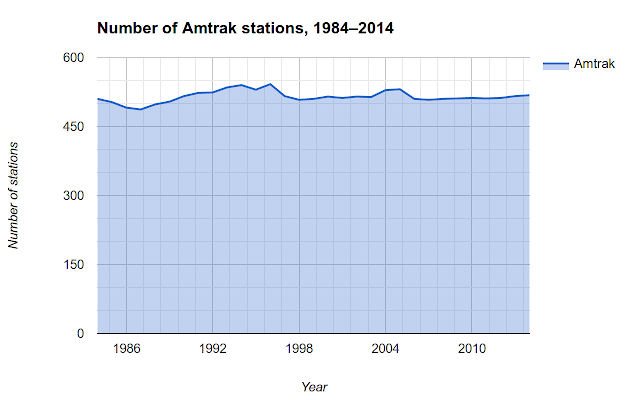 Meanwhile, Amtrak began the period with 510 stations and ended with just 518, an aggregate increase of just 1.6%. Amtrak's station count has fluctuated more than that over time, with the system reaching a low of 487 stations in 1987 and attaining a peak of 542 stations in 1996. It's a bit difficult to explain why Amtrak has been stuck in this rut for so many years while there has been a sustained investment in local rail service within metropolitan areas, but there has been a lack of coordination for new or restored routes in most of the country.

The United States' population grew from 238.5 million to 318.9 million over that period of time, so Amtrak's reach should have enlarged too. If Amtrak had grown at the same rate as our urban transit systems, there would have been about 940 stations in their system as of 2014. That doesn't necessarily mean the system would have 84% more mileage, though: One of Amtrak's biggest failings is that most routes only have one train per direction per day. Increasing service frequency could allow a mix of local all-stop trains and faster limited-stop trains along a single route, with the local trains potentially serving new/restored infill stations along the way. (Many Amtrak trains today are essentially "hybrids" of what used to exist, stopping more frequently than old express services, but less often than what locals used to do.)

Each new or enhanced route requires the involvement of multiple cities and metropolitan areas, so it needs to at least be coordinated at a state level, and many good potential routes (even if they're fairly short) are spread across two or more states. Amtrak is structured so that individual states are responsible for planning and finding funding for routes that are less than about 700 miles (following legislative changes passed in 2008, the states can still get federal funding for building lines, but operational costs must be borne by the states for these shorter "corridor" routes). That creates a disincentive for the company to pursue new routes on its own, since adding even a single new train on a 700+ mile route is very expensive (hundreds of millions of dollars if the PRIIA studies from 2009 are any guide).

What's the right way to coordinate new intercity train lines in the country? The American Association of State Highway and Transportation Officials (AASHTO) played a critical role in organizing planning across states when the highway system was developed (back before "and Transportation" was added to the group's name), but it's not clear if they've ever had much of a hand in planning rail service. Their Standing Committee on Rail Transportation meets once a year for what they describe as a "debrief and networking meeting", which sounds like a very passive group (plus, the committee only has members from 33 states versus the 46 that are currently served by Amtrak). AASHTO should take their interstate coordinating role seriously and reexamine the potential for intercity rail across the U.S.

Here in Minnesota, we've also had a very weak structure for coordinating intercity rail plans. The state's Passenger Rail Office has been underfunded and understaffed, requiring a heavy reliance on outside consultants rather than MnDOT employees tasked with working in the best interest of the state. The Republican-held state legislature is attempting to entirely defund the office as part of the state budget, even though it has only represented a tiny percentage of MnDOT expenditures over its existence (a couple million dollars per year), and it's particularly galling to have it happen when the state is projected to have a $1.65 billion surplus anyway.

Intercity trains don't get the same attention that urban rail systems do, and I find that to be a shame, since I think it makes it a lot harder for many people to give up their cars, even in cities with good transit service. I personally hold on to my car due to my need to travel to areas in or near Fargo, Eau Claire, and Rochester for family and work, and all of those places would get rail service if we implemented the plan that's been on the books since 2010.
Posted by Mike Hicks at 10:00 AM 1 comment: