Rochester and its transit landscape

Rochester has edged out Duluth to become Minnesota's third-largest city. They clocked in at 106,769 residents last year, a massive 24.4% increase over 2000 when there were 85,806 people living there. With such growth, it's easy to see why the idea of a rail link to Rochester has gained traction in the past few years. Of course it's been discussed about for two decades now, so maybe I shouldn't expect much—but, the route was endorsed by Mn/DOT again in last year's state rail plan, which gives me some hope. A new Zip Rail organization formed to promote the idea of a line, and Governor Dayton even broached the topic when he met with U.S. Transportation Secretary Ray LaHood earlier this year.

So how important would a link to Rochester be? The Mayo Clinic is a big draw, bringing in patients from all over the world. The local airport became "Rochester International Airport" in the 1990s when it was outfitted with a customs facility, though it's hard to say how often it gets used these days. I was a teenager around that time, and there were always stories about rich Middle Easterners renting out entire floors at local hotels and giving out $100 tips to pizza delivery drivers. I've lived up in the Twin Cities since 2000, so I don't know how the post-September 11 environment affected things, but I'm sure there are plenty of other foreign millionaires who avail themselves of Mayo's services.

It's hard to overstate how massive Mayo is. The 2006 transit plan for "Med City" said the clinic has 28,000 employees in town. They're mostly clustered in downtown, but Mayo vacuums up office space wherever they can find it.

The next-biggest employer, IBM, was variously listed in the transit plan as having either 4,500 or 6,000 employees. IBM is up in the northwestern part of town in a large building (actually a cluster of interconnected buildings) that is a mile across and has half the square footage of the Pentagon. I think most of it is 3 stories tall, so that also gives you an idea of how much space Mayo would take up if it was all crammed into a unified building or campus.

Rochester City Lines, a private company, operates the city bus network, along with an expansive commuter network (shown above) which serves 37 different locales—mostly small cities, though a few places are unincorporated (the suburban/exurban population served still tops 125,000, partly due to tentacles reaching some larger cities like Austin and Winona). The city buses operate 6 days a week Monday through Saturday, while commuter buses only run Monday through Friday. Most places on the commuter network see two or three round-trips daily, though a few see less while Kasson and Byron get one extra. One daily bus, operated by RCL's parent, Richfield Bus Company, typically runs from the Hiawatha LRT's 28th Avenue station in Bloomington and then hits Inver Grove Heights before heading south. Fares for single trips on their buses seem pretty high at first glance, ranging from $9 for "Zone C" cities like Byron, Stewartville, and Pine Island up to $23 per trip for the "Zone H" Twin Cities bus. However, the 10-trip and monthly passes offer pretty steep discounts of 40–60%.

There are a lot of shuttle buses operating between downtown Rochester and the Minneapolis/Saint Paul International Airport. GO Rochester Direct operates 17 round-trips daily (16 on weekends), while Rochester Shuttle Service has 12 daily round-trips. Their fares are in the range of $22 to $29, with cheaper fares for people making a single-day round-trip.

The GO Rochester Direct folks also coordinate with GO Carefree Shuttle which operates from La Crosse to Rochester via Winona on 6 RTs daily. They also appear to be the main shuttle service to Rochester from the Winona Amtrak station.

I poked at the regular intercity bus carriers, and it looks like only Jefferson Lines runs to Rochester, and it may only be a single trip daily. I'm not sure what route it takes, but the shortest southbound time seems to be from the Hawthorne Transportation Center in the Minneapolis's Warehouse District, while the shortest northbound trip appears to be to the MSP Airport. Annoyingly, Jefferson drops people off in Rochester at the Homestead Hotel at 1600 Marion Rd, three miles from downtown. Maybe there's a point to that, but I have no clue. Perhaps the shuttle operators managed to kick Jefferson out of downtown somehow.

For air travel, there appear to be 5 flights daily from MSP to RST on Delta, though they came out at a whopping $279 per ticket when I just checked—over ten times what it costs to take a shuttle bus. Delta also flies from Detroit to Rochester once a day for $576, apparently. American Airlines goes from Chicago O'Hare to Rochester five times a day for somewhere north of $130.

So, what did Rochester have historically? The Chicago Great Western operated several passenger trains through Rochester daily in the 1920s, perhaps most notably with the not-quite-a-streamliner Blue Bird. However, cars became more popular and the Great Depression took its toll, so it appears the last CGW service ran in 1931, and it may have taken all Twin Cities service with it. Passenger service continued on the Chicago & North Western line through the city until 1963 when Chicago & North Western's Rochester 400 was shut down, but it only ran from Chicago in the east to Mankato in the west. I suppose people could have taken the train west to Owatonna or Mankato, or east to Winona to transfer to other services to the Twin Cities, but that would have been pretty tedious.

The old north/south tracks of the Great Western are mostly gone now, save for a spur line to the AMPI dairy-processing facility just south of downtown, but the east/west ex-C&NW tracks remain and are now owned by Canadian Pacific through their Dakota, Minnesota and Eastern subsidiary.

Will a new rail service ever come to Rochester? It seems unlikely in this political climate, but if you've got a price range of between $22 per trip and $280+ per trip to play around with, then there's a hell of a lot of wiggle room. Current airline flights to Rochester must generate $10 million or so in revenue each year, and the flying demand from the Twin Cities is tremendously limited by the high price.

Mn/DOT figures that a 110-mph service between Rochester and the Twin Cities would generate north of 500,000 trips per year. Over 30 years, that would generate, say, $750 million if the average fare was $50. That's probably a much higher fare than what they were thinking about, but it's definitely a hell of a bargain for someone who would otherwise try to fly. And would people pay $50 to go 220 mph and get to Rochester in about 35 minutes compared to a 1.5-hour shuttle bus? I'd guess so, and that would probably blow well past 500,000 annual trips. 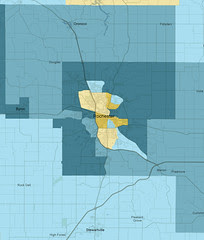 Well, of course, I like trains, and I'd like to see one built, so I'm sure I'm avoiding a lot of major issues. However, Rochester seems to be avoiding major issues too: One thing I noticed about the city when I opened up the New York Times' 2010 Census tool was that the city shows the classic donut pattern of population increase on the edge and decline in the center. If the city's borders were constrained by inner-lying suburbs, it might have seen a decline in population rather than the massive increase seen in the last decade. Census tract 2 in the city, east of downtown, declined by 17.2%.

To help its residents survive the coming decades, Rochester will need to begin to rein in development on its outer edges and refocus development in the center of town just like central cities in big metropolitan areas are having to do. Right now, Rochester has a pretty mediocre Walk Score rating of 45 and most of the city has a fairly low density. The Slatterly Park area is apparently the densest part of town and actually grew in population over the last 10 years, but it's almost entirely composed of single-family homes. Clearly there are parts of the city that need to start building upward and becoming more mixed-use. The second-densest part of the city is in the Cimarron Park area, way up north of 41st Street, and the population there is mostly stuck in residential pods without much to do. The current low density through much of the city means there is plenty of opportunity to build quality mixed-use low-rise and mid-rise apartments and condos closer to Mayo's central presence. Allowing the city to continue growing outward without bound would be a major mistake.

It will also be important for them to plan for the eventuality that Mayo stops expanding, and even begins declining. It's impossible to know when that might happen, but I imagine it will come about at some point. I doubt the growth can go on forever, so Rochester leaders really need to diversify their economy as much as possible.