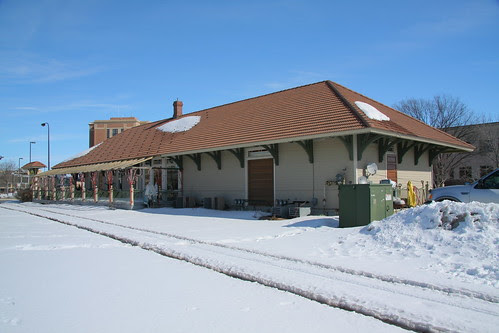 Despite the current political climate, the Rochester-Twin Cities High-Speed Passenger Rail Project (known as "Zip Rail") is heading into a series of studies expected to take 24 months, presumably ending in late 2013 or early 2014. The route got a grant from the 2009 state legislature, and yesterday, the Olmsted County Regional Rail Authority authorized the use of $2 million to begin work on a service development plan (SDP). I've never heard of an SDP before, but here's the breakdown given in yesterday's meeting packet (there are a few familiar terms within):


The Service Development Plan will include:


Following the SDP study, an environmental impact statement (EIS) phase will likely be required, and that's probably going to take two years at a minimum. Mn/DOT plans for the route to initially run at 110 mph. They're capping upgrades at 150 mph, though Rochester boosters would like to see the train go as fast as possible (220+ mph). As much as I'd like to see that, Mn/DOT is probably making the wise choice—on this short corridor, increasing the top speed from 150 to 220 would only drop the travel time by 10 to 15 minutes. On the other hand, a very high top speed would become desirable if the link becomes part of a longer corridor extending all the way to Milwaukee and Chicago.

At any rate, the OCRRA appears to be thinking ahead—immediately after authorizing the service development plan, they authorized a bonding request for $15 million which will go toward funding the NEPA process (including the previously-mentioned EIS) and preliminary engineering. The money may also be used as matching funds for Federal Railroad Administration grants if they become available. Remember that $500 million in bonding that Governor Dayton required before accepting the Republicans' state budget earlier this year? This line could become one of the beneficiaries.

Lest you think this is sudden, a high-speed link to Rochester has been discussed for more than 20 years now. Initially, the city had been considered as a stop along the way from the Twin Cities to Chicago, but the route was also subject of a 2003 study that focused more directly on simply linking Rochester to Minneapolis—Saint Paul.

The line to Rochester may bring with it an intercity train station at or near the Minneapolis—Saint Paul International Airport. Since the airport is 20 minutes to half an hour closer to Rochester than Minneapolis's Interchange station will be, it makes a lot of sense to build a new stop there. It'll be interesting to see what form such a station might take—some plans have called for it to actually be located across the Minnesota river in Mendota or Mendota Heights, though such a station would require an extra bus, tram, or light-rail trip. I'd personally suggest boring a third tunnel at the current Blue Line/Hiawatha Line station at the airport's Terminal 1 (Lindbergh), but we'll see what happens. I suppose it'd be simpler to just plop another station at Terminal 2 (Humphrey).
Posted by Mike Hicks at 9:59 PM