A broader look at passenger rail opportunities in Minnesota

I've spent a lot of time on mapping projects over the past several years, focusing in particular on rail lines through Minnesota and nearby regions. Since the state and national rail networks peaked in the 1920s, and have been shrinking ever since, a lot of that mapping has been a bit depressing. There have been a number of times when I've gone into OpenStreetMap to mark once-busy line as as disused, abandoned, or completely obliterated with virtually no trace left behind.

The size of Minnesota's rail network has been roughly cut in half since since its 1920s apex, but there are still 4,444 route-miles of existing railroad in the state, according to MnDOT. That's almost five times the size of the Interstate highway network in Minnesota (916 miles) and a bit over a third the size of the total trunk highway system (11,814 miles including Interstates, U.S. highways, and state highways, though that's still a tiny fraction of the 143,000 total miles of roadway within the state). 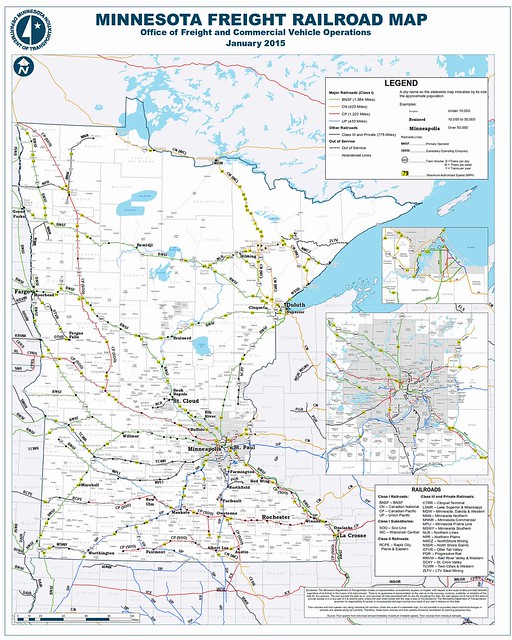 MnDOT's freight rail map from January 2015. Active lines are in color or black, while abandoned corridors are shown in dashed gray lines.

However, even though Minnesota's 4,444-mile network reaches most of the places you've heard of and many of the ones you haven't, only about 375 miles (about 8%) of it is used for intercity passenger trains. Over 90% of the system is only used for freight traffic.

Here's a map I created to show what we have for existing conditions for passenger rail in Minnesota and nearby areas. This primarily shows Amtrak's Empire Builder, but Via Rail's Canadian is also shown passing through Manitoba and Ontario to the north. I mapped a green segment coming out of Minneapolis showing the Northstar Line, and I also included a line out of Duluth for the North Shore Scenic Railroad (You can't really go anywhere on that line, since they're just excursions out and back from the Duluth depot, but it's probably the most significant other rail segment in the region that regularly sees passengers travel over it). 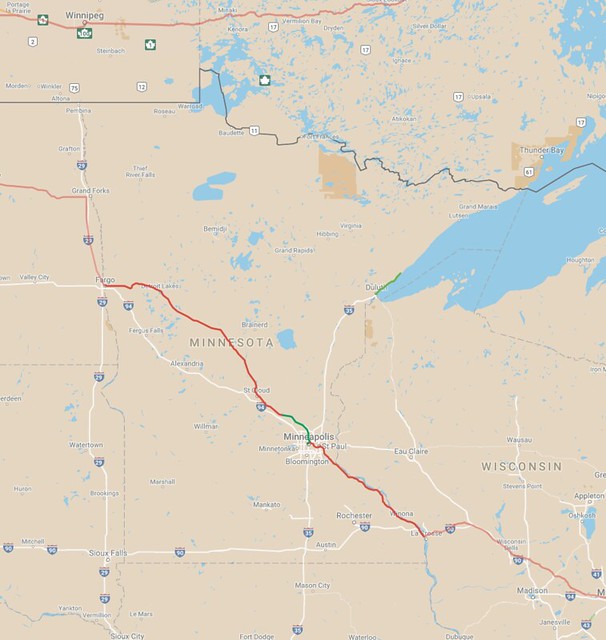 Here's the same map, but including markers for cities with populations of 5,000 or more (Stars denote capital cities, squares are used for the largest cities per state, and circles mark either the 10 largest cities per state/province, or cities over 75,000 when the state/province is large enough, such as with Thunder Bay in Ontario. Smaller places are noted with orange or yellow diamonds): 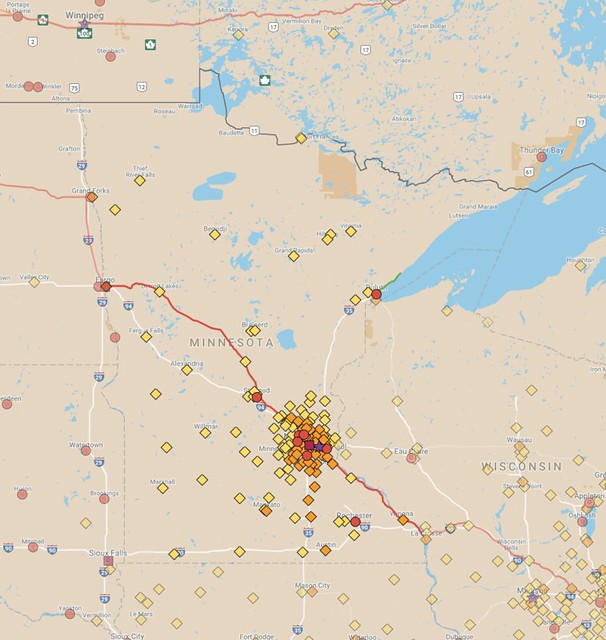 The national Amtrak passenger rail system is an extremely skeletal network that sometimes has gaps of hundreds of miles between corridors, and most of the system only sees one train per day per direction.

We're relatively lucky that Amtrak even stops in the Twin Cities. To our south in Iowa, Amtrak misses the state's capital and largest city, Des Moines, by about 50 miles. The most-populated place in Iowa directly served by Amtrak is Burlington, the state's 19th-largest city. (Iowa's 7th-largest city, Council Bluffs, gets an honorable mention since it is a suburb of Omaha, Nebraska, where Amtrak does have a station.) To our west, Amtrak doesn't even bother serving South Dakota, even though the Sioux Falls region has a population of about 250,000 and Rapid City, near the Black Hills, has a metro population of 144,000.

Even though Amtrak only has six stops in Minnesota (Detroit Lakes, Staples, St. Cloud, Saint Paul, Red Wing, and Winona) and three others just across the border (Grand Forks and Fargo in North Dakota and La Crosse in Wisconsin), they can easily claim to serve more than half the state's population, simply because the 3.1 million out of the state's total 5.5 million population is concentrated in the Twin Cities region. I think we deserve a lot better than that, though.

Places like Rochester (3rd largest city in the state after Minneapolis and St. Paul) and Duluth (5th place, barely behind Bloomington) have no service, not to mention numerous other smaller towns.

One of my observations during my years mapping is that most places with populations of 5,000 and up still have freight rail service. This isn't always true, but the rule holds pretty well for outstate Minnesota. From what I can tell, the only towns of that size outside of the Twin Cities lacking freight rail are Hutchinson (pop. 14,000, about 60 miles west of Minneapolis), and Stewartville (pop. 6,000, about 13 miles south of Rochester).

There are more examples within the Twin Cities, particularly postwar suburbs, but even most of them are still within a few miles of railroad lines due to the denser network of tracks in the metro area. Woodbury, the state's 9th largest state (pop. 68,000), is the biggest to not have direct rail service, but its neighboring cities of Oakdale and Lake Elmo do have tracks running through them.


I decided to try making a map to show how much of the state and surrounding area could be linked using existing track, and how much might need to be rebuilt or constructed on new alignments in order to make a suitable network. You might call this a "fantasy map", but I prefer to think of it as a "mapping experiment", since it's mostly based around infrastructure that already exists.

Here's what I came up with (still somewhat of a work in progress). Existing freight lines are marked in blue, while purple is used for routes that would need to be built new or reconstructed: 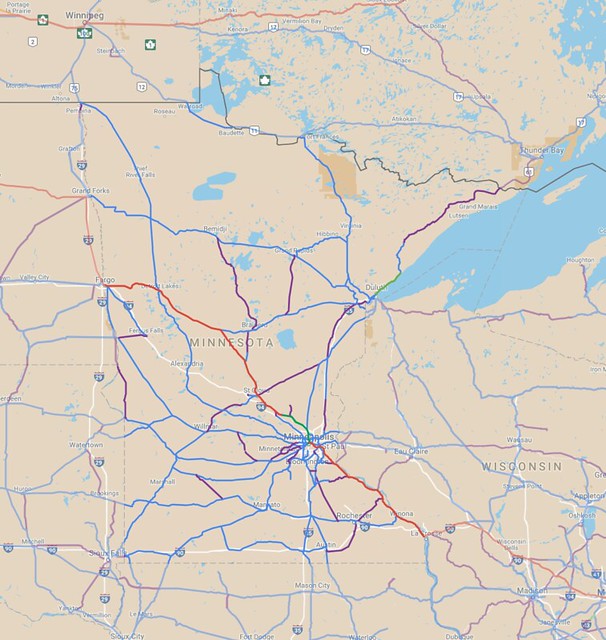 Here's the same map again, but with cities included: 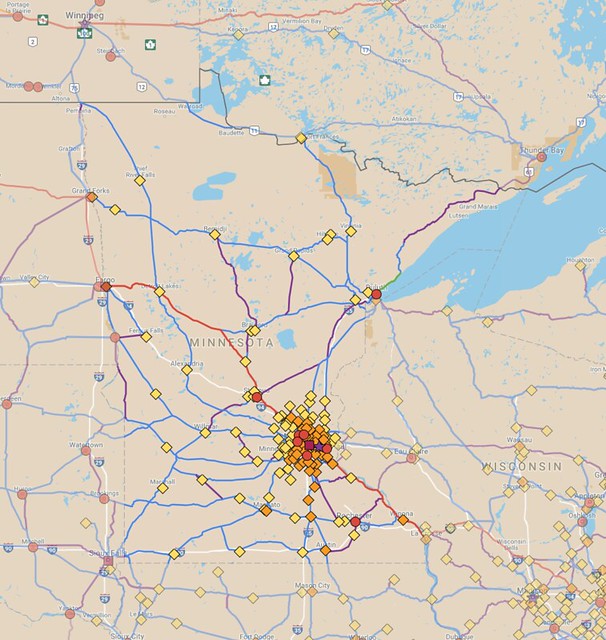 The system that emerged in my map adds up to about 4,275 miles within Minnesota's borders, including 3,475 miles of existing railroad (78% of the state's freight system) and adding or restoring about 805 miles of other corridors to create a tighter mesh. If all of that was built for passenger service and other existing freight lines were retained, this would re-grow Minnesota's overall rail network by about 18% to 5,250 route-miles.

Most of the purple routes follow abandoned rail lines, but a few, including connections for the off-network towns of Hutchinson and Stewartville, plus segments of the line to Thunder Bay, Ontario, use alignments that I invented.


My population threshold of 5,000 was fairly arbitrary—it's probably a lower population than most transportation planners would think of connecting by rail, but cities of that size can still generate quite a bit of traffic.

My hometown of Byron is currently estimated to have a population of about 5,300 people, and according to the Census's OnTheMap tool, 1,785 people who live in Byron are employed in nearby Rochester. If each one of those people decided to drive to work at exactly the same time, the line of cars would be nearly 7 miles long standing still and would stretch to 100 miles if they were moving at 65 mph with a 3-second trailing distance—not so good considering that Byron and Rochester are only 10 miles apart. Plus, that's purely a measure of commuter traffic—there are always additional trips for dining, shopping, and other activities to consider too.

I wish there was more transportation thinking happening on this scale, since I think it would massively improve our chances of meeting climate change goals in the transportation sector. If this network existed, it would be much easier to have a car-free or car-lite life, even in a rural small town. Cities of 5,000 and up account for 70% of the state's population, and an extensive network like this would also dramatically improve public transportation access for the remaining 30%.

MnDOT has a passenger rail plan with some of these routes included in it (the image below is from the 2010 version of the plan), but their system always struck me as a bit flawed since it was entirely centered on the Twin Cities and it didn't give much priority to the lines to Sioux Falls or straight south to Albert Lea (toward Des Moines). The latter line has since been upgraded to a higher priority, but that's not saying much considering the slow pace of planning for these routes. 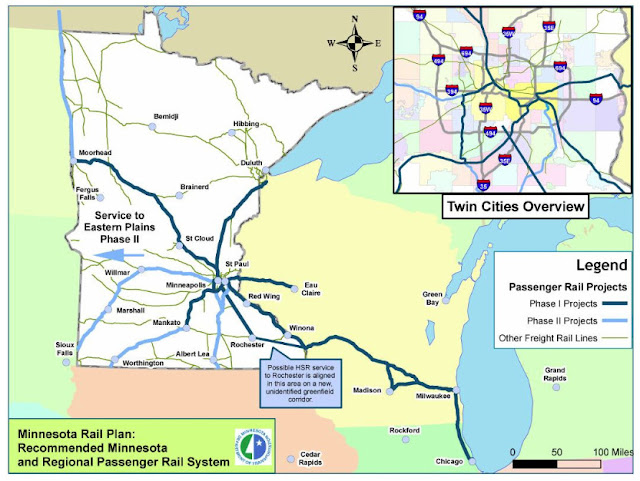 In my opinion, MnDOT's passenger rail plan is the minimum we should be aiming for, but they've had insufficient financial and personnel resources to even execute that vision. Their plan would reach most cities over 20,000 in population (at least outside of the metro area), but for now it remains little more than an idea.

Planning for the Northern Lights Express service to Duluth continues to trundle along, though the planned speed and frequency of service has been cut back. Formerly fast-moving plans for high-speed service to Rochester have been shelved due to lack of funds and the emergence of a private company that claims they'll build the line instead, but it's not clear whether that organization will move forward either.

It's been like pulling teeth to get any movement on a mere second daily train between the Twin Cities and Chicago, and plans for faster and more frequent trains on that line have been held up because of an obstinate government in Wisconsin.

Something significant has to be done to shake us out of the rut of car-dependent transportation planning across the state. In a previous post, I suggested implementing a statewide 1% sales tax that could be applied to both urban transit and intercity projects like this, estimating that it could generate about $740 million per year, enough to fully fund the equivalent of at least one 150-mile Northern Lights Express project annually.

It would take a few decades to build out a system as big as what I've suggested, and such a scale might not be fully attainable given future lifecycle costs, but some back-of-the-envelope calculating suggests revenue from a 1% sales tax (assuming about half of that went to urban transit and the other half was for intercity links) would make it possible to build out and sustain a system of at least 2,000, putting it somewhere in between MnDOT's suggested system and my concept.

What do you think? Where would you draw the line for intercity service?
Posted by Mike Hicks at 10:00 AM