The single-tracked world of American railroading 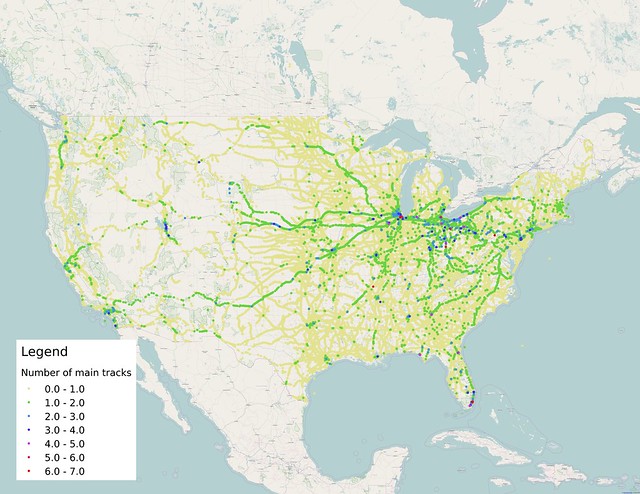 Here's a map I put together using the Federal Railroad Administration's Highway-Rail Crossing Inventory database, focusing on the number of main tracks at public grade crossings across the country. The main thing to see is that the vast majority of our rail infrastructure is single-tracked, only allowing trains to travel in one direction at a time on segments of track that don't have passing sidings. (For this version of the map, I didn't attempt to show sidings.)

There are only a dozen or so major double-tracked corridors that show up on this map. Some routes, like the double/quadruple-tracked Northeast Corridor between Washington, D.C. and Boston, Massachusetts, are mostly or wholly invisible, since they are grade-separated and don't have any level crossings. Many metropolitan areas and rail hubs have splotches where there are three or more tracks, but they're usually for very limited distances.

Some rail routes are double-tracked due to running heavy, slow trains. This includes routes in northern Minnesota that were built to haul iron ore/taconite to seaports on Lake Superior. In Wyoming's Powder River Basin, the triple-tracked Joint Line shows just a few public crossings. It's used to haul coal out from the region's mines to connecting routes, some of which are themselves double-tracked.

BNSF's Southern Transcon connecting Southern California to Chicago shows up particularly well—it's a route that carries a lot of intermodal traffic from West Coast ports. Union Pacific's corridor between Northern California and Chicago doesn't show up quite as much—for some reason, there aren't many crossings shown out west, though it also has more single-tracking.

Routes that have a significant amount of double-tracking correspond pretty well with maps of Amtrak service. Out west, the Amtrak Cascades corridor is easily visible between Oregon and Washington, and the Capitol Corridor stands out in California. Other long-distance routes in the Eastern U.S. and Midwest also show up pretty well: The route of the City of New Orleans, the Crescent, and the Silver Star (which shares parts of its route with a couple other long-distance Amtrak services).

Double-tracking isn't a requirement for passenger routes, but double-tracked lines make scheduling much more flexible and can dramatically increase capacity over lines that only have a single main track. Single-tracked lines are constrained in the number of trains they can carry by the number of sidings, spacing between them, and siding length, not to mention the general condition of the line and other design features that limit train speeds.

Most rail maps of the United States don't differentiate between busy and lightly-used rail lines, in contrast to maps of the highway system which are able to classify roads based on design. Each can be misleading, though—just as a busy rail line doesn't look much different than a quiet one, it also isn't obvious from the design that that Interstate 94 is far busier in Wisconsin than it is in North Dakota or Montana.
Posted by Mike Hicks at 3:25 PM 2 comments:

Last Thursday, after a delay of almost 2½ years, the Amtrak study for adding a second daily train between the Chicago and the Twin Cities was finally released. The agreement to begin the supposed nine-month study was signed back on May 3, 2012, and it finally arrived on July 2, 2015, thirty-eight months later. Cue your Amtrak jokes now.

The delay is bad. Even worse is the fact that this is just a feasibility study without any actionable output—just more data to put into another phase of study later on. The level of detail is pretty bare-bones, and fails to put this improvement in the context of any other projects in Minnesota's state rail plan (Wisconsin doesn't even have a rail plan, because Scott Walker). And of course, there's no funding in place to do anything more at this point, so we'll continue along the course of twiddling thumbs and wasting time.

None of these documents alone are enough to understand what's going on. The press release got Bob Collins confused. The study itself got me confused. You probably need to look at all three, and this is for a study that is relatively basic—something that should be routine and unremarkable.

The study conclusions—or rather, the conclusions put into the executive summary because the study itself drew no real conclusions—are themselves unremarkable and obvious, perhaps looking a bit preordained: Yes, adding a second train is a good idea. Yes, it would increase ridership along the corridor—more than double it, actually. Yes, ending it in St. Paul is the cheapest, simplest option.

Is that the best option? Yes. Well, maybe. Um, er—just wait for the next phase of study when we actually bother to do benefit-cost analysis. 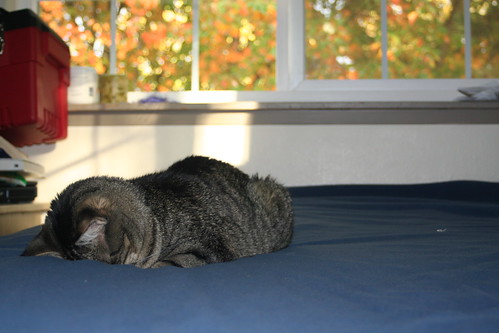 There is some helpful information coming out of the study from computer modeling of train ridership, operating costs, and getting an idea of the upgrades needed along the route to support the extra. It's embarrassing that it took so long for the information to be generated, though.

The study looks at four main scenarios, all based on the Empire Builder's current travel corridor, but with the western endpoint somewhere in the Twin Cities or St. Cloud area rather than all the way out in Seattle and Portland. The options are:
Obviously, "Scenario 4" is the cheapest to implement, since it's the shortest route. It's the one recommended in the executive summary, although that's a short-sighted conclusion, if you ask me.

Each scenario was evaluated with three different alternatives based on different departure times from St. Paul, given the letters A, B, and C. These have a decreasing order of implementation cost—schedule "A" encounters the most rail traffic congestion and needs the largest number of improvements, while schedule "C" is least congested and therefore the cheapest.

Ridership is apparently the reverse, although only schedules "A" and "B" were evaluated in detail. Schedule "C" is assumed to have the same ridership and operating costs as "B", which may or may not be a valid idea. You'll only find schedules "A" and "B" in the study report itself. "C" is mentioned in passing, but you need to look at the executive summary to see it listed.

The executive summary (and the press release that was derived from it) quoted the capital cost ($95 million) from Scenario 4C, annual ridership (155,000) from Scenario 4B, and an annual operating subsidy ($6.6 million) that matches Scenario 4A.

Okay, I kind of get the first two, but what's the deal with that subsidy number? For an era where we are obsessed with cost subsidies, why didn't the study partners tout Scenario 3B/3C, which would extend to Minneapolis, pull in 22,000 additional passengers, and therefore only need $4.5 million in extra support annually?

The price tag is higher for building service to Minneapolis or beyond, of course. Here are the estimated capital costs and ridership estimates for each scenario's "C" alternative (using "B" ridership figures, of course):

Scenarios 1 through 3 all have lower operating subsidies than scenario 4 because of those extra riders, but the higher construction cost is a big barrier. The cost per passenger is lowest for scenario 3, however—only modestly lower for the numbers above ($904 vs. $910). 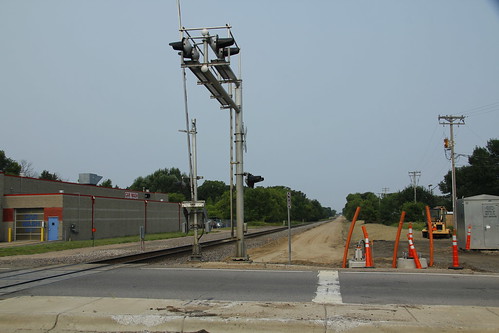 Planned and in-progress projects like this addition of a $63 million second main track from Big Lake to Becker make the study's cost estimates out-of-date already.

However, the cost savings grows if you include the added cost of new rolling stock (add $46 million to all scenarios), and remove the cost for improvements already planned for the route to Minneapolis (subtract $8 million from scenarios 1 and 3). It's possible to subtract a large chunk of cost from scenarios 1 and 2 to St. Cloud too, since BNSF Railway already has a $63 million project underway to add a second track in a gap that exists on their line between Big Lake and Becker.

The cost of extending the train to Minneapolis, at least in terms of the basic rail infrastructure, could be paid back in less than 10 years due to reduced operating losses. Admittedly, the feasibility study only considered the tracks and platforms, and ignored things like a new waiting area, but that could/should be carved off into a separate project, especially considering how it would be shared with the Northern Lights Express to Duluth, an eventual extension of Northstar to St. Cloud, a second daily train to Fargo, and other projects that have been on the drawing board for years already.
Southeast of the Twin Cities, Canadian Pacific Railway also has improvements planned, including a third main track near the Amtrak station in La Crosse. It's not clear whether that's included in the current figures or not, as the study only gave a singular high-level cost estimate for the whole distance between St. Paul and Milwaukee—a big amorphous blob of millions of dollars with zero detail given.

The fact remains that adding a second train between the Twin Cities and Chicago is a good idea and has been for a long time. Over the long term, the per-passenger cost (including capital and annual subsidy) is comparable to or less than the price to fly the route—and the train connects eleven cities rather than just two.

This is the type of improvement that should take less than a month to decide on and less than a year to implement. It doesn't take an airline three years to choose whether or not to add one more flight on a route that's already in service. It doesn't take a freight rail company three years to decide whether to run another oil train from a productive area. But somehow, adding one daily round-trip between the Midwest's two most prosperous metro areas has already taken at least that long and is probably on track to take at least that long again.

Perhaps what this report needs is to be fed through an anger translator: A second train should be started tomorrow. Other places should be connected too, but they might take a little while—How about we give it nine more months?
Posted by Mike Hicks at 10:00 AM 2 comments: