Progress on Minnesota passenger rail projects, but funding is limited

My periodic article for streets.mn 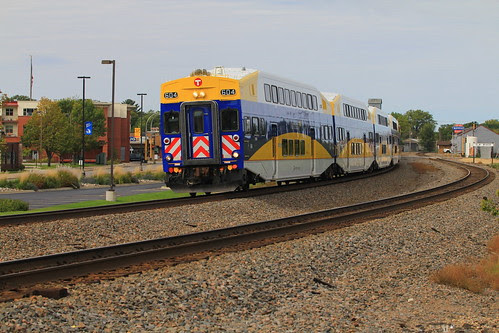 For the past few years, the Minnesota Department of Transportation has been facilitating the Intercity Passenger Rail Forum, a monthly-scheduled meeting between policymakers at the state, city, and county levels plus various other organizations who are working on various projects to maintain existing passenger train service and add/restore other lines. Some meetings get canceled if there isn't much to discuss, though one was held on Monday this week, and I was able to sit in.

The funding picture for passenger rail is not very bright this year. The Minnesota House and Senate have included some freight rail projects in this year's bonding bills, such as money to replace or upgrade highway/rail grade crossings, but there hasn't been any funding put forth for the Southwest LRT line from Minneapolis to Eden Prairie. The House had $1 million for the Gateway Corridor along Interstate 94 toward/into Wisconsin (though the Gateway Corridor dropped commuter rail from their study last month). The Senate bill had $5 million in it for the Minneapolis Transportation Exchange, a plan to expand the Northstar and Hiawatha stations at Target Field in order to handle additional commuter, intercity, and light-rail traffic.

For the time being, many projects will have to rely on existing funds or see if they can obtain more money from cities, counties, and the federal government rather than the state.

Bob Manzoline from the Northern Lights Express project said that the Minneapolis to Duluth line is in the final stages of environmental review and plans to release their Environmental Impact Statement for public comment sometime this month. The public will be able to respond to it for about a month, the NLX project will respond to comments, and finally a Finding of No Significant Impact (FONSI) should happen around June or July, meaning the project will be ready to proceed with final design and construction. Some design work has already happened—Most recently, the project has been doing LIDAR mapping (like radar but with lasers) along the route. The mapping project has resulted in some calls to police because it's been done with black helicopters hovering 300 feet above the tracks, and people have been wondering what's been going on.

A 6–8 month study is also planned to determine whether the train should simply run straight to the center of Hinckley or divert out to the edge of town to directly serve Grand Casino.  A direct connection to the casino would likely bump up ridership, and the study will attempt to find whether the diversion is financially justifiable.

Project officials say they'll be able to get 30% of the design complete with existing funding.

The presentation for the Zip Rail line to Rochester was focused around a recent study that said that building the line would provide about $1 billion in economic benefit annually—If true, that would generate $784 million in new tax revenue to the state plus another $1.6 bililon in taxes to the federal government over the first 25 years of operation.  The study relied heavily on IMPLAN economic modeling software for those numbers.  More direct user benefits in terms of time savings, avoided crashes, and reduced emissions were calculated to save $725 million over 25 years.

Nobody really knows what alignment the Zip Rail line might take yet (it might follow parts of the abandoned Chicago Great Western route which goes down to Dodge Center, it might run closer to U.S. 52, or any number of other paths), so there wasn't any attempt to try and calculate changes in property values.

The project is still moving forward on its service development plan and is working toward doing an Alternatives Analysis and EIS, some of which can be accomplished with existing funds.

A fairly brief update was given for the Union Depot project in Saint Paul.  Things are progressing rapidly and the project is more than 60% complete.  Contractors will soon begin paving the parking area underneath the station's massive train deck between Kellogg Boulevard and Shepard/Warner Road.  Tracks should be installed soon (the website for Trains magazine reports that a "first spike" ceremony will be held at the end of April).

Left out of the discussion was the fact that Greyhound Lines has decided not to run their buses to the depot once it opens, opting instead to consolidate into their Minneapolis depot at the Hawthorne Transportation Center.  Greyhound still has a small depot on University Avenue near Rice Street, though it will close after May 6th when Central Corridor construction blocks access.  Along that block, LRT tracks will shift to the south side of University Avenue (rather than running in the center), which will prevent bus access to the old depot.

Jefferson Lines, which also uses the Greyhound depot in Saint Paul, is planning to operate out of Amtrak's Midway station for St. Paul customers until the Union Depot opens for service.

Bafflingly (to me, anyway), it turns out that Amtrak is going to continue to use their Midway depot for switching cars and for storage.  On most trips, an extra car gets added/removed to handle higher loads between the Twin Cities and Chicago, plus private cars are sometimes added to the train.  I'm hoping there's a good reason for the situation, though I don't know what the reason is yet.

The Union Depot is expected to fully reopen in November or December.

The Minneapolis Transportation Interchange, a project to expand the light- and heavy-rail platforms at Target Field, is almost ready to begin.  Operations of the Hiawatha Line were already changed at the beginning of March so that trains no longer use the tail tracks at the extreme western end of the route.  A permit to demolish the Environmental Services Building across 5th Street from the Ford Center is expected any day now.

Funding has been a bit of an issue for this project.  There either wasn't much discussion of money at the meeting, or I just didn't follow it well enough to write it down, but reports in the Star Tribune have said that there's roughly a $30 million shortfall on the project at the present time.

There was a mention that some portions of the project might be sliced off and handed to private sector interests who may be able to build on their own (some retail has been planned in the station area).

There are two distinct but clearly interrelated projects in the pipeline for adding train service between the Twin Cities and Chicago: A short-term plan to add a second daily train between Minnesota and Illinois, plus a medium-term plan to implement 110-mph train service with higher daily frequencies.

An Alternatives Analysis happened last year to select a route for trains reaching up to 110 mph between the Twin Cities and Milwaukee (they'd continue to Chicago, but the study specifically looked at the shorter corridor).  Mn/DOT is proceeding on to a Tier 1 Environmental Impact Statement—at least once they get done responding to all of the comments they got on the AA.  They received a lot of messages from people and organizations who wanted the train to go elsewhere, such as through Eau Claire.  Nonetheless, Mn/DOT will continue working on the Minnesota side of the route.

WisDOT is not actively participating in that study at the moment but is collaborating on the second daily train.  Amtrak is going to conduct a small study with funds from Mn/DOT, WisDOT, and La Crosse County, Wisconsin to figure out how much a second train would cost.  There's also a question about where the train should terminate in the Twin Cities: Saint Paul Union Depot?  The Minneapolis Interchange?  Should it go farther to St. Cloud?  How about one of the Northstar stations in between?

There wasn't any obvious discussion about the situation at Talgo in Milwaukee.  Talgo is a Spanish train manufacturer who moved in to an old automotive plant in the city a few years ago to build trains for Amtrak's service between Milwaukee and Chicago, and who could eventually build trains for the service to Minnesota.  The Wisconsin legislature recently blocked funding to build a maintenance facility for the new trains, which means that two nearly-complete trains may be put in storage once they're done.

At least one of the new trains had been expected to visit the Twin Cities by the end of June on a demonstration/endurance run, so it's not clear whether that will happen or not.  On Wednesday, Talgo announced that they will start laying off workers on June 3rd.  But then again, the recall election for Scott Walker is on June 5th.  Anyone have a crystal ball handy?

There wasn't any significant discussion of the Northstar Line that I recall, but there are a few things happening that I should mention anyway.

The Star Tribune recently reported that an extension to St. Cloud won't happen until the existing line reaches 4,500 daily passengers (it's only around 2,000 today).  A new station is being added in Ramsey which should bump up ridership by around 15%, but that's still a long way from what's needed to make the Northstar run the longer distance.  A 230-unit residential project will also start construction next to the station next week, and other cities are also working on transit-oriented development zones around their stations, so ridership should keep climbing modestly for a while.

Of course, the biggest complaint about Northstar is its frequency of service.  Mn/DOT said at an earlier Passenger Rail Forum meeting that they were submitting a TIGER 2012 grant request to the U.S. Department of Transportation seeking to do a grade-separation of tracks at Foley Boulevard in Coon Rapids (just north of MN-610), which should help with that problem.  This project has been submitted before as an attempt to build a third main track in the area and add a station at the Foley Boulevard park-and-ride, which would increase capacity enough to run some more daily round-trips on the line.

However, TIGER grants have been very competitive.  The project failed to make the cut under the first round of TIGER grants a few years back.  I haven't been able to find a copy of what was submitted, so I don't know whether it was essentially the same as the old $99 million request or if it was smaller.  (The TIGER program for 2012 is only $500 million for the entire country, so a grant for 1/5th of that money would be unlikely.)

The new Ramsey station should open in November.

So, despite a funding stream that has been choked off quite a bit, there's a lot going on in terms of future passenger train service in the state.  It's hard to say whether it will all come to fruition, but there will definitely be a few new destinations popping up soon.
Posted by Mike Hicks at 2:34 PM